Simple Minds - Someone Somewhere In Summertime

New Gold Dream (81-82-83-84) is among my all-time favourite albums. It was released in 1982 and is without a shadow of a doubt Simple Minds' finest moment. The nine songs form a brilliant whole, and its opening track, "Someone Somewhere In Summertime", is pure bliss. Both "Promised You A Miracle" and "Glittering Prize" were released as singles before the album came out, more than hinting at greatness, but when New Gold Dream eventually was released in September and the opening synth riffs of "Someone..." came waltzing out of the loudspeakers, they clinched the whole deal. My life as a music lover has not been the same since. In November of 1982 "Someone..." was released as the third and final single from the album. 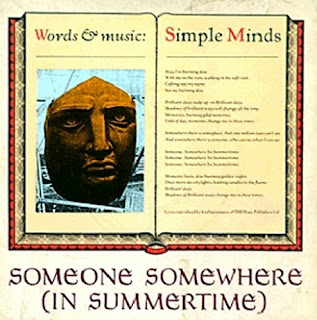