JJ Cale died yesterday from a heart attack, 74 years old. He was a highly influential musician and songwriter, and among his most ardent fans was Eric Clapton who recorded many of his songs, most notably his 1976 hit "Cocaine" that Clapton also had a hit with the following year. Here, in a 1971 live clip, is the fantastic "After Midnight", that was first recorded by Clapton in 1970, and appeared on Cale's 1972 debut album Naturally. May he rest in peace. 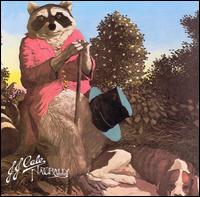