It was only a few weeks ago that I discovered Canadian synth-pop band Young Galaxy, whose fourth album Ultramarine was one of the best records to slip through my fingers in 2013. Had I discovered them earlier, the album might very well have ended up on my Top 25 list, and what is very certain is that the single "New Summer" would have figured high on my list of the year's best songs. It's a beautiful, atmospheric and romantic ballad, that's in every way gorgeous. The video however is in stark contrast to the actual song, showing what happens when an atomic bomb goes off. It's not anywhere as pretty as the song is. 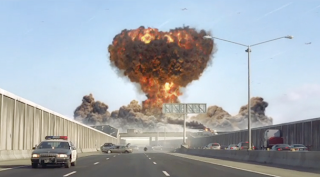