The fact that Mama Cass (Elliot) is credited for this single release "with The Mamas & The Papas", displeased band leader John Phillips quiet a bit as it was recorded by the fabulous vocal group when their future was uncertain and the label Dunhill Records chose to give Mama Cass the main credit. No matter, it is, and forever will be, associated with the band, featuring on their final album The Papas & The Mamas (1968). The song "Dream A Little Dream Of Me" is a lot older though, written by Fabian Andre and Wilbur Schwandt with lyrics by Gus Kahn in 1931, but the Mama Cass take is the most famous recording of it by far. For good reason to, as beautiful as it is. 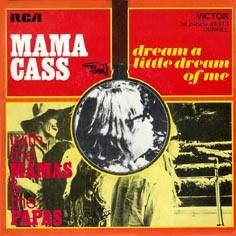