Band Aid - "Do They Know It's Christmas?"

When Bob Geldof and Midge Ure gathered some of biggest British pop stars around in 1984 and recorded the "Do They Know It's Christmas?" single under the moniker Band Aid, their main intention was to raise money for the victims of the ongoing famine in Ethiopia. They succeeded beyond their wildest dreams when not only "Do They Know It's Christmas?" became a monster international hit single, but it led to the next summer's huge Live Aid event, and to similar recordings and events in many places of the world. This is still a song I need to play every Christmas, a true classic that also has the true Christmas spirit inherent, that of doing something for your fellow man, woman and child. 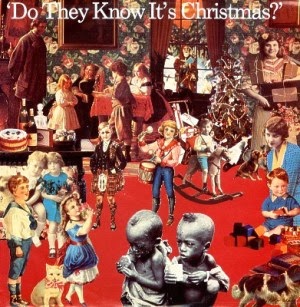