Inspired by Emily Brontë's 1847 novel Wuthering Heights, Kate Bush wrote what would become her debut single when she was 18, releasing it at 19, endorsed by Pink Floyd's David Gilmour who helped her get a recording deal with EMI. No wonder he took to her. As was very soon evident to most people with their hearing abilities intact, Kate Bush was - and is - a major talent, one of pop music's most beguiling and fascinating figures. It's her biggest selling single to date, spearheading the album The Kick Inside that was released in February 1978. It still sounds fantastic after all these years and remains one of her very best songs, despite a career that has seen many a top notch composition. Is there really anything not to like about this woman? 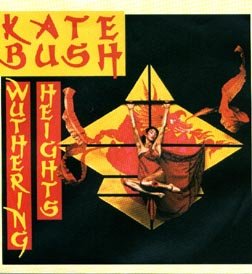