Redbone - Come And Get Your Love

"Come And Get Your Love" was a huge American hit in 1974 when it peaked at number 5 on the Billboard Hot 100 chart in April. The band Redbone may be largely forgotten but were a Native American/Mexican American rock band that released seven albums in the 70's. This was their biggest hit, and it keeps on popping up on compilations, in films and elsewhere. For good reason too. It's a fantastic pop song, with some clever 70's disco strings thrown in for full effect, lifted from their 1974 album Wovoka. 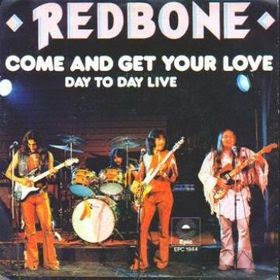