Jim Croce - Operator (That's Not The Way It Feels)

"Operator (That's Not The Way It Feels)" is as sad a song as they come. The narrator tries to get hold of his former girlfriend who's hooked up with his "best ex-friend" through a telephone operator, telling his sad story through the song. In the end he decides he doesn't want to talk to her anyway, thanking the operator for her time. Jim Croce, genius singer/songwriter died in a plane crash in 1973, the year after this was a hit, along with his musical partner Maury Muehleisen, also seen in the video below performing this ridiculously beautiful ballad. It was released as the second single from the album You Don't Mess Around With Jim. Diana Krall does a brilliant version on her brand new covers album, Wallflower, and you should check that out as well. 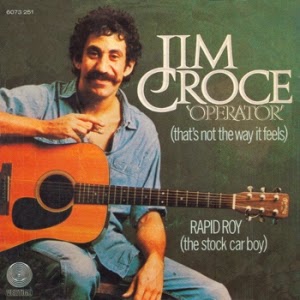