Happy birthday to Art Garfunkel who's 70 years old today. After Simon & Garfunkel disbanded he's pretty much always lived in the shadow of his former partner who wrote all the duo's songs and also is the one with the most successful solo career. But Art Garfunkel has had his moments, and his voice is an incredible instrument. "Bright Eyes", written by Mike Batt, is his biggest solo hit, the theme song from the film adaptation of Richard Adams' wonderful novel Watership Down. It was a huge hit in several countries, and was actually the biggest selling single in the UK in 1979. Say what you will, but Paul Simon has never been near a similar feat. The accompanying clip shows scenes from the movie. 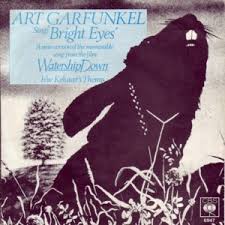