1992's Nonsuch was XTC's last major label album, a triumph of a pop record, that produced singles such as "The Ballad Of Peter Pumpkinhead" and "The Disappointed". The album title Nonsuch is taken from Nonsuch Palace, the Tudor royal palace that was built by Henry VIII in Surrey, and both the album cover and the video made for "The Disappointed" reflect this. Pop trivia aside, this is a killer pop song that shows Andy Partridge's songwriting skills at their very best. 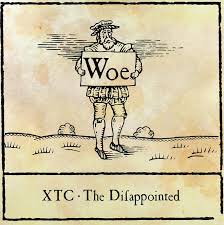