Only one word properly describes the latest Duran Duran video: Fantastic! It's directed by famous Swedish music video maverick Jonas Åkerlund who's also worked wonders for Lady Gaga, Britney Spears, Rolling Stones and numerous others, and features a cast of supermodels in the roles of the actual band members of Duran Duran; Naomi Campbell, Cindy Crawford, Helena Christensen, Eva Herzigova and Simon Le Bon's wife, Yasmin Le Bon. The video is nine and a half minutes long, and the song is intertwined with interview bits where the ladies answer questions about what it's like to be in the band and so forth. It looks like more than a million dollars, to say the least, and was shot at London's elegant and truly luxurious Savoy Hotel, that reopened last October after a three year long refurbishment that cost something like 100 million pounds. The pictures from the photo shoot features in the December edition of Harper's Bazaar magazine. This is all very entertaining stuff indeed, and by the way, "Girl Panic!" is a good song too. 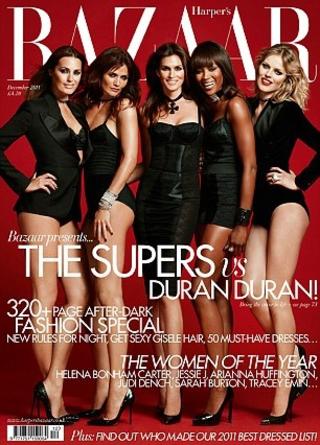