Comedy rock duo Tenacious D - actor Jack Black and rock musician Kyle Gass - recorded this amazing song, a blend between Led Zeppelin's "Stairway To Heaven", Metallica's "One" and scores of other classic rock songs, for their 2001 debut album, and it was released as a single with a very funny music video the next summer. "Tribute" tells the story of when friends Jack and Kyle meet a demon while walking down a lonely road, asking them to play "the best song in the world or else I'll eat your souls". Amazingly they just happen to play it, and upon recounting this tale they're not able to remember it, hence, this is a "Tribute". The really funny thing, of course, is the fact that "Tribute" is a fantastic song. A piece of trivia for you: Foo Fighters' Dave Grohl plays the demon in the video. 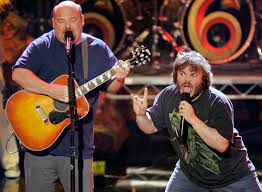