The Clash - Should I Stay Or Should I Go

The Clash finally got their first UK number one single, several years after they'd disbanded, when their 1982 single "Should I Stay Or Should I Go" was used in a Levi's commercial in 1991. Well-deserved as it's one of the coolest songs ever. It's lifted from the band's final album Combat Rock. (I know, I know, Cut The Crap was released in 1985, but neither Mick Jones or Topper Headon is on it, and it doesn't count as a proper Clash album.) 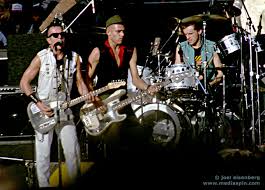