Frankie Goes To Hollywood followed up their debut monster hit "Relax", with "Two Tribes", which became the longest-running number one single in the UK between 1978 and 1991, even bringing "Relax" back up to the number two spot at the same time. The song's title is lifted from the film Mad Max 2: The Road Warrior - "When two great warrior tribes go to war" - and is a commentary on the strained relationship between USA and the Soviet Union at the time of its 1984 release, near the end of the cold war. The Godley & Creme-directed music video features actors portraying Ronald Reagan and Konstantin Chernenko fighting it out - dirty, I might add - in a pit surrounded by world leaders from around the globe. The clip you'll see here is the so-called "Video Destructo" version, opening with cut-up monologues featuring Richard Nixon, John F. Kennedy, Yasser Arafat and others. 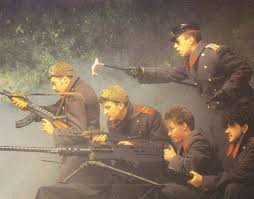