Yesterday we played "Only The Lonely" from the legendary Roy Orbison & Friends' Black And White show, today we're going for yet another performance from the show, the timeless "Oh, Pretty Woman", originally released in 1964. This version recorded in 1987 garnered Orbison a posthumous Grammy award, mainly I guess because of James Burton and Bruce Springsteen standing on either side of a mildly baffled Orbison trading guitar licks. It's an incredible performance. 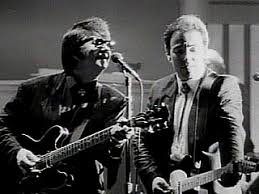