If you're a Steely Dan fan, you'll be pleased to know that Donald Fagen returns with his fourth solo album Sunken Condos in October. The following info is lifted from his website:

Donald Fagen's fourth solo album for Reprise Records, Sunken Condos, will be released on Tuesday, October 16 2012. His first three solo albums, The Nightfly, Kamakiriad and Morph the Cat comprised the project known as the Nightfly Trilogy. Sunken Condos begins a new chapter in the creative evolution of this innovative artist, whose career is still going strong after forty years.

The nine tracks on Sunken Condos were co-produced by Michael Leonhart and Donald. All but one track, an Ashkenazi recasting of Isaac Hayes' Out of the Ghetto, are new Fagen originals. Some familiar names from the Steely Dan family of players are on hand (Jon Herington, the Steely Dan horns, Freddie Washington) plus some new faces. The word is that, from now on, everything Donald does has got to be funky. 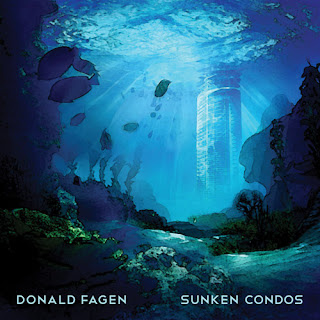