I must have written once or twice about James Yuill before, but as he's still a complete unknown for most music lovers, I found it necessary to introduce him anew now that he's just released his fourth album, the brilliant These Spirits. 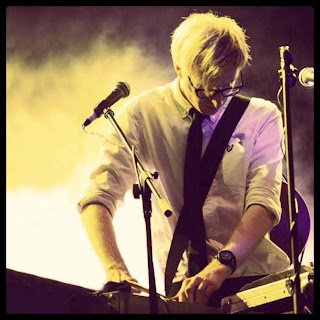 James Yuill is a London-based singer/songwriter who mixes folk and electronica, a mix sometimes labelled folktronica. Unfortunately I have not heard his debut album The Vanilla Disc, released on his own label in 2005. The follow-up Turning Down Water For Air though, first released in 2007 by himself and re-released on the Moshi Moshi label in 2009, was a very promising piece of work that led up to third album Movement In A Storm (also Moshi Moshi) in 2010. That's the album that got me hooked, not least because of the absolutely fantastic song "First In Line" and the beautiful "Taller Son".

Almostr three yeats later Yuill has finally released a new album, once again on his own Happy Buscuit Club label, and it's as fine an album as the last one, or maybe even better. The music is decidedly melancholy, but here and there goes into kind of a party territory, and is almost always very dance-friendly. A song like "Let It Go" sounds like a folk version of Swedish House Mafia, with an overall 80'synth vibe, definitily reminiscent of Tears For Fears. First and foremost though, James Yuill is a hell of a tunesmith, whether you want to call his music electronica, folktronica or anything else. He's got a knack for writing killer melodies, and the new album is chock full of them.

You'll find a few links below, including a full stream of his new album. Listen closely, and if you like it, please spread the word. James Yuill seems to have a hard time of breaking through, and he should, brilliant musician and songwriter that he is.

Watch the video for new single "Turn Yourself Around"