Willie Nelson, a living legend if any, turns 80 today, probably smoking some weed, strumming a tune and generally having a good time. Ever prolific the country music icon recently released his new album Let's Face The Music And Dance, an excellent collection of (mostly) country standards, credited to Willie Nelson And Family. Below are a handful of Willie classics, to show just how important a figure he has been for popular music throughout his career, from writing the Patsy Cline evergreen "Crazy", through his "outlaw" years, and into old age where he's as good as ever. And he's as good at performing the songs of other writers as he's good at writing his own. Viva Willie! 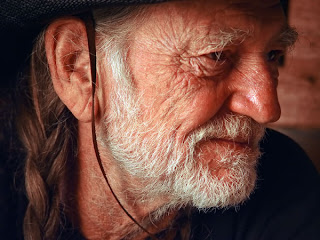 Willie Nelson - "All Of Me"

Willie Nelson - "On The Road Again"

Willie Nelson - "Always On My Mind"

Neil Young & Willie Nelson - "Are There Any More Real Cowboys"

Willie Nelson - "Still Is Still Moving To Me"