Eurythmics - I Saved The World Today

Their heyday was very much behind them when Eurythmics - Annie Lennox and Dave Stewart - found back together to record a new album after a nine year long break where they concentrated on solo work and other projects. Peace, as the 1999 album was called, sold pretty good, but wasn't enough to make much of a difference either way. The single "I Saved The World Today" however, can safely be said to be among their very best, a beautiful pop ballad where Annie Lennox really shines as a singer. Peace may be a forgettable album, but this single stands tall among the entire Eurythmics output. 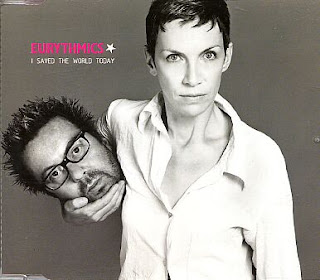