I must admit that it took some time before the new Phoenix single "Entertainment" hooked me, but after several tries it did. "Entertainment" is a strange hybrid of a potential hit single, with its classic Phoenix-sounding verses, cut up with the big-ass Asian.sounding chorus. It's jubilant and fun with an enormous soundscape that almost threatens to drown the actual song. The video, shot in Korea, perfectly matches the song with its dramatic scenes that look like they are lifted from an actual movie. As for the entire album Bankrupt! that is out this week, it must be said that it too is a grower. At first it sounds pretty chaotic, but as you dig deeper and get to the levels below the surface, the album actually sounds great. 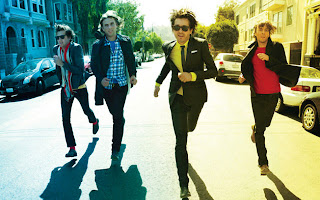