"Everything Counts" was the eighth Depeche Mode single, released in the summer of 1983, the first taste of the as yet unreleased album Construction Time Again. It's very different from anything on their recently released album Delta Machine, but you can hear the seeds of the more industrialized sound they delved further into as the years went on. Although "Everything Counts" is a genuine piece of synth pop it also has a darker side that came to fore on the album proper. 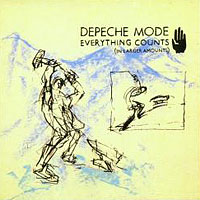