"Some Velvet Morning" is really two songs that merge into one. It was written by Lee Hazlewood, and recorded with Nancy Sinatra for her television special Movin' With Nancy in 1967, and also released on the album of the same name. Their separate vocal parts are very different, each of them singing a different melody from the other, in a mix-up of psychedelic elements of the era that blend together perfectly in an eerie marriage of ghostlike music. It's a strange song and one of the best of their several collaborations. 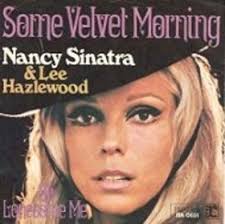