M.D.N.A. is the title of Madonna's forthcoming album her first for her new label Interscope after leaving Warner, the label she's been with since her 1983 debut album. It's her first album since 2008's Hard Candy and will be released in March. The first single is "Gimme All Your Luvin'", a song of which a demo was leaked last November against her wishes. It's apparantly a new version we'll hear now, and she will perform it for the first time during the Super Bowl halftime show on February 5th. 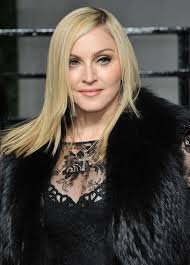