The Cure's fabulous "Lovesong" off 1989's Disintegration album was mysteriously the third single to be released from it, after the almost equally fab "Lullaby" and the far inferior "Fascination Street". It's an extraordinarily well-written ballad, and hearing Adele's version on last year's album 21 was a delight. The acoustic live clip featured here is just as good though, stripped down to a bare minimum, Adele's voice and her companion's laidback guitar-strumming. Magical! 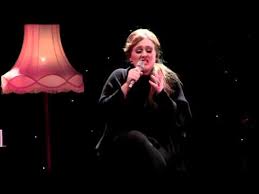