Aztec Camera - Walk Out To Winter

"The sound of young Scotland" was the slogan of independent Scottish record label Postcard Records that was founded in Glasgow in 1979, as a home for bands such as Orange Juice, Josef K and Aztec Camera. The latter was essentially singer/songwriter Roddy Frame and sundry musicians, and of these bands his was the one with the most success after the inevitable demise of the label. Aztec Camera released only two singles on Postcard, "Just Like Gold" and "Mattress Of Wire", both in 1981, and left for the bigger indie label Rough Trade. "Walk Out To Winter" first appeared on debut album High Land, Hard Rain and was later issued as a single, only to reach a paltry number 64 in the UK singles chart. Greater success followed years later, but the freshness of the first Aztec Camera releases proved hard to match. "Walk Out To Winter" is just a fantastic song! 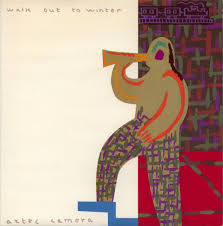