Creedence Clearwater Revival - I Heard It Through The Grapevine

""I Heard It Through The Grapevine" is a landmark song in the history of Motown." So begins the entry on this song on Wikipedia, and truer words may never have been written. The song was written by Norman Whitfield and Barrett Strong, in-house songwriters/producers/what-have-you of the famous Detroit label. Smokey Robinson & The Miracles were the first to record it in 1966, Gladys Knight & The Pips had a big hit with it in 1967, Marvin Gaye had the biggest hit and made it his siganture song in 1968, and then Creedence Clearwater Revival made it their own with an eleven minute version on their 1970 album Cosmo's Factory. This is absolutely awesome, an incredible achievement, a song to eclipse and even surpass most of John Fogerty's own compositions which were in many cases incredible in themselves. CCR's take on "... Grapevine" is one true classic! 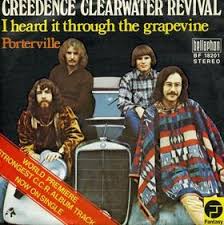