Yazoo were singer Alison Moyet and synth wizard Vince Clarke. Clarke had left Depeche Mode hanging in the wind after being the mastermind behind their debut album Speak & Spell and found Moyet, a singer of extraordinary pipes, to further collaborate with. The partnership resulted in two albums before Clarke became restless once again, and "Don't Go" (1982) is the second fabulous single from their debut album Upstairs At Eric's. Synth-pop doesn't get much better than this. 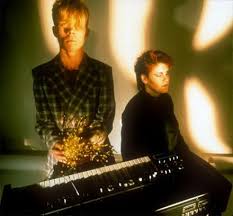