Mary Chapin Carpenter - On With The Song

American singer/songwriter Mary Chapin Carpenter's fiery protest against her government's foreign wars were released as a single off the album The Calling in 2007 but of course didn't chart on the Billboard Top Country Songs. Sadly it seems that Carpenter's most commercially successful days are long gone, but it's no wonder really with songs as political as "With The Song", a rant against warmongers, crooked politicians, religiuos fanatics and profiteers.

One of the verses go like this:
"This isn't for the man who can't count the bodies
Can't comfort the families, can't say when he's wrong
Claiming I'm the decider, like some sort of messiah
While another day passes and a hundred souls gone"


Her conclusion to it all and the way she sees her own role in the world is just as clear: "I've got to be true to myself and to you, so on with the song, I don't give a damn!" 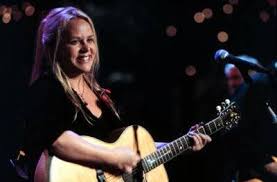