Ultravox' second album with Midge Ure as singer was called Rage In Eden (1981) and built heavily upon the successful change in musical direction the band started on Vienna the previous year. It featured the singles "The Thin Wall" and "The Voice" but also great tracks like "We Stand Alone". The sound, imagery, everything about Ultravox in these years were very European, and  Ure's vocals fitted perfectly. And this song still sounds great, 31 years on. 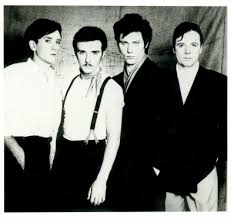