What happened here? How did Simple Minds go from their atmospheric masterpiece New Gold Dream (81/82/83/84) to this? "Waterfront", released towards the end of 1983, was the first taste of their Sparkle In The Rain album to be released a few months later, and was a monster, a bombastic, explosive beast of a song, radically different from what the Scottish band had been doing up until then. In truth, "Waterfront" signalled the start of Simple Minds' commercial peak, when they morphed from a krautrock-inspired, in all respects European-sounding band, into a stadium-baiting live outfit. They still hadn't released their biggest hit "Don't You Forget About Me" (that was in 1985), but they paved the way with Sparkle In The Rain. It was not a very good album, and especially not as a follow-up to New Gold Dream, but it did have a few good singles, the first of which was "Waterfront". 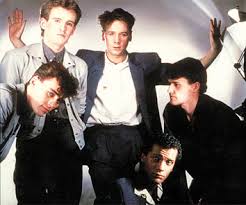