In 1966 and 1967 the artists of the Stax-Volt record label, went out on a grand European tour. It took them to Oslo, Norway in 1967, where this clip was filmed. Among the artists present were Otis Redding, Arthur Conley, Eddie Floyd and Sam & Dave. The backing band was of course the best in the world, Booker T & The MG's and The Mar-Keys Horns, and this seven minute version of Sam & Dave's big hit "Hold On, I'm Comin'" shows just how good they were. 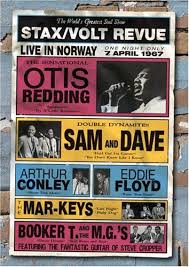