Dean Martin - Gentle On My Mind

In 1967 the American bluegrass and country performer John Hartford released his second album Earthwords & Music, featuring his most famous composition, "Gentle On My Mind". Although Hartford's version was only a modest success, Glen Campbell sang the song to the Billboard Top 40, and helped Hartford net two of a total of four Grammy awards the song won in 1968. Campbell's version still didn't reach higher than 39, and in 1969 Dean Martin took the song to number 9 on the Billboard Easy Listening chart and to number 2 in the UK, making it the highest-charting version of all, and that's more than 300 different versions. I really love Dino's light performance, it sounds so utterly unrestrained and elegant with his voice carrying the beautiful song, and the arrangement is just as perfect. 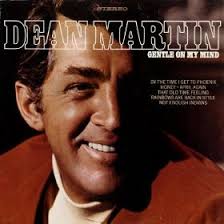