Janet Jackson - What Have You Done For Me Lately

Janet Jackson's 1986 album Control is her masterpiece, in large part thanks to producers Jimmy Jam and Terry Lewis who also co-wrote most of the songs with Jackson and must have helped her find her own true songwriting self. "What Have You Done For Me Lately" was the first single off the album, her third, released in January, spearheading an hour's worth of minimalist synth-driven funk and stunning ballads that totally redefined Jackson and turned her into a superstar. The album and its first two singles, "What Have You Done For Me Lately" and "Nasty", can be seen as forerunners of an entire generation's worth of female R&B artists and their songs, showing their male counterparts where it's really at. Janet Jackson may not be considered a feminist performer by most, but this song was undeniably important for a lot of future female performers, kicking some serious ass along the way. Forgive me if this sounds shallow, it's not meant to. I seriously regard this song as a feminist anthem, and Jackson sounds as tough as nails. 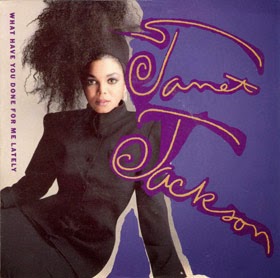