Chris Isaaks' new album Beyond The Sun is among his very best. On it he interprets classics originally performed by Jerry Lee Lewis, Elvis Presley, Johnny Cash, Roy Orbison, Carl Perkins and others from the Sun Studios catalogue - and beyond - and he does it like a natural. He's even written two songs himself that fit seamlessly into the record. Here's his take on the Hugo Peretti/Luigi Creatore/George David Weiss classic "Can't Help Falling In Love", and although Elvis did the definitive version in 1961 (not on Sun Records, he recorded for RCA at the time), Isaak does an extraordinary job. This is for my beautiful wife, Helle! 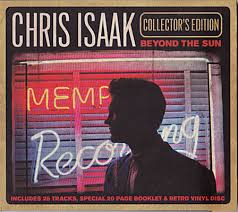