At the height of the first synth-pop era (there is a fair argument for another one going on at the moment), few bands were better than Ultravox. With their seemingly effortless run of three great albums in a row, Vienna (1980), Rage In Eden (1981) and Quartet (1982), they forever wrote themselves into the annals of popular music history. The songs were very European-sounding, quite pompous at that, and full of melodies to kill for. "The Voice" is among their very best singles, lifted from Rage In Eden. A classic if there ever was one. 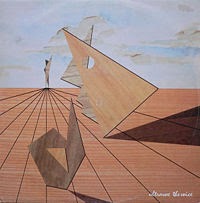