Rodney Crowell's first proper solo album since 2008's Sex And Gasoline is finally out on Monday. Called Tarpaper Sky it's a collection of 11 fabulous songs from the former US country chart topper who kind of reinvented himself with 2001's album The Houston Kid and has made his best records in later life. Still only 63 though, his songs still seem like effortless creations, and what may be said as a first impression of Tarpaper Sky is that it's more diverse than we're used to. No surprises on the track "Frankie Please" though, an energetic country rocker about the titular Frankie, a woman who "tore through my life like a tornado looking for a trailer park", and musically reminiscent of Crowell's 1978 classic "I Ain't Living Long Like This". Great to have the man back! 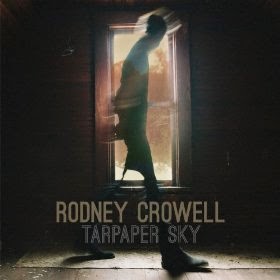