The title track off Lily Allen's new Sheezus album is the fourth single released from it, before it's even out, which is finally happening next weekend. With first single "Hard Out Here" and a spat of recent interviews she's done her very best to criticise the music industry as she sees it today, as sexist, cowardly and shallow, and she does have some excellent points. In a recent Rolling Stone interview she said she would have loved to have "Sheezus" released as a single, but was told it wasn't up tempo enough and also has the word "period" in it. Well, now it has become a single despite her label's previous misgivings, and it's a good song, a fine combination of hip hop and electronic pop music, with a chorus in which she namedrops and partly ridicules her competition, such as Rihanna, Katy Perry and Lady Gaga. Allen is navigating the same musical waters as many of these, playing the pop music game to its full extent but at the same time twisting and turning it around, and in doing so and being the person she is, her project turns into a lot more than just a record. Don't think for a minute though that she doesn't know what she's doing when she's criticising radio stations for being weak and cowardly, that's just a very good way to gain attention. The groundwork for the Sheezus release has been executed beautifully, and I'm pretty sure it's a wildly interesting album. We'll see in a few days' time. 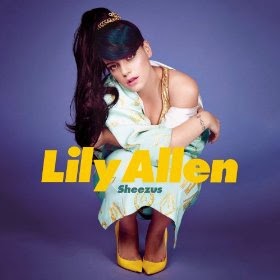