Before he joined up with Tracey Thorn to become husband and wife duo Everything But The Girl, Ben Watt released a collaborative mini-LP with Robert Wyatt, and one solo album, the stunning acoustic masterpiece North Marine Drive, released in 1983. It features eight Watt originals and a striking version of Bob Dylan's "You're Gonna Make Me Lonesome When You Go", a song that perfectly matches the albums melancholic and sad mood. The very best song on it though is "Waiting Like Mad", possibly the saddest song ever written, with the protagonist experiencing the ultimate hurt and heartbreak and tumbling about in it. I think I can safely say it's among my all time favourite songs - Top 10, that is. As you may have noticed from my blogging lately, Watt has finally recorded his follow-up album, 31 years later, the wonderful and quite different Hendra. Check out both albums, but first, here's "Waiting Like Mad" for you. 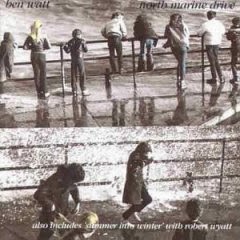