Crowded House - Mean To Me

Between 1986 and 1991 Aussie band Crowded House released three faultless albums, Crowded House, Temple Of Low Men and Woodface. Fronted by singer/songwriter Neil Finn, formerly of Split Enz and brother of that band's main figure Tim Finn, Crowded House could seemingly do nothing wrong. The consistency of these three albums is remarkable, containing some of the best pop songs ever written, and although the overall quality took a turn for the less consistently brilliant after Woodface, Finn has never forgotten what a great pop song is. He still writes them, but not with the same kind of frequency as before. "Mean To Me" was the first song on the 1986 debut album, paving the way for all those other great tracks. I just love the opening couplet: "She came all the way from America/She had a blind date with destiny". By the way, the song begins at 1:33 in the video. 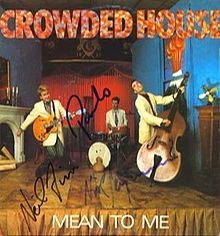