Here's the video for the latest Nick Cave And The Bad Seeds single, the eerie "Jubilee Street", a tale of a hooker and a john who's lured in by her seductive beauty in Brighton's red-light street Jubilee Street. Which is not that kind of street at all. Cave was under this wrong impression when he named the song, and in the latest issue of music magazine Uncut he says "it's actually the one that has the library in it. Shows where my life is these days! It sounded good, though, so it just stayed that way in the end." The video is directed by Cave's friend and collaborator John Hillcoat (Ghosts... Of The Civil Dead, The Proposition, The Road, Lawless) and features the fabulous Ray Winstone in the role of the john. Great video, spooky music, and simply a fantastic song from what is a fantastic album, Push The Sky Away, in shops this weekend. 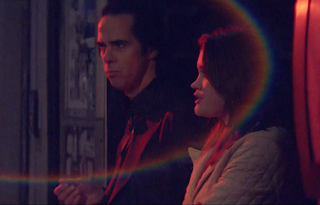