I really like the Atoms For Peace album Amok that was released a few days ago. It's the debut album from Radiohead singer Thom Yorke's new "supergroup" that also includes Red Hot Chili Peppers bassist Flea, longtime Radiohead producer Nigel Godrich, Joey Waronker who's been a drummer for Beck and R.E.M., and percussionist Mauro Refosco. The album is a wondrous musical journey that seems inspired by music from all over the world, but shares a certain electronic ambience that is coupled with the evident musicality of those involved. "Ingenue" is one of nine songs that flows and moves, in and out of your consciousness, almost dreamlike, captivating, fascinating and a bit strange. Normally not a big fan of Radiohead, I fell completely in love with the outtake "Staircase" from The King Of Limbs sessions, and the Atoms For Peace songs seem to take their cue from this. The video is predictably strange as well, and fits the song like a glove. 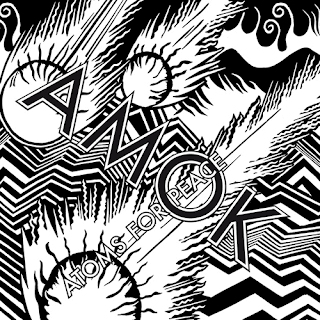