Quarter Wolf is an Oslo-based Norwegian/Australian duo consisting of singer/guitarist Marius Kromvoll and drummer Paul Daniel. The pair describes their music as blues punk and rock'n'roll, and is influenced by bands ranging from MC5 and Stooges, to Jon Spencer Blues Explosion, The White Stripes, Queens Of The Stone Age and Black Keys - and a lot of good stuff inbetween. In other words, this is music for the groin more than the mind, and it's fun, raucous and a bit sexy. It's amazing how much sound one guitar player, one drummer and a good producer can come up with. Now for the good news: During 2013 Quarter Wolf will put up a new song for free downloading each month, starting with the excellent "Lone Wolf", and at the end of the year will release it as a vinyl album, to be named An Orgy Of Shocking Violence which is a line lifted from Hunter S. Thompson's book Kingdom Of Fear. 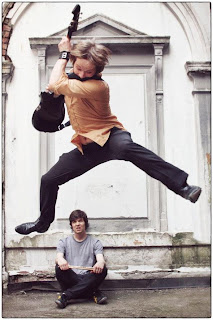