Everything But The Girl singer and solo artist Tracey Thorn has written an autobiography that was just published, having collected dust for some years after she simply abondonded the project in 2007. What came in the way of the book was actually her return to music - an utter relief to those of us who love her voice dearly - and we are quite a few - having missed it since 1999. 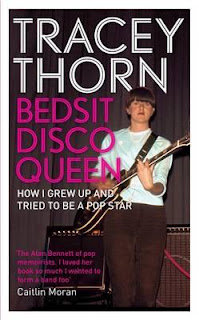 Bedsit Disco Queen: How I Grew Up And Tried To Be A Pop Star is not your average rock'n'roll autobiography, and how could it be? Thorn has always been strongly opposed to the notion of rock cliches, and been decidedly "indie" or DIY in her approach to most aspects of her career. The book does as promised in the title, tells an abridged story of a fairly normal upbringing in Brookmans Park, a small suburb just north of London, and then how she just misses the advent of punk but becomes absorbed in the post-punk records of the late 1970's, before sort of becoming a pop star.
She picks up her first guitar at 16, a Les Paul copy, and as she really didn't think of the fact that you need an amp to play an electric guitar, she starts out playing without one, which might account for the raw and naked but nevertheless silent-sounding music of her first records, both with The Marine Girls (two albums) and her first solo album, 1982's A Distant Shore.

The book goes on to tell about her move to the university in Hull where she meets Ben Watt, lifelong partner, both romantically and as one half of Everything But The Girl. The band's story, and that of Tracey Thorn, is a story of the usual ups and downs a musical career will take, but Thorn's refreshing and not quite everyday look at the music business and its machinations makes for entertaining and interesting reading. She is also quite funny.

Twice in her career she has experienced true pop stardom in the form of real hit singles, first with Everything But The Girl's cover version of Danny Whitten's "I Don't Want To Talk About It" in 1988, and then in 1995, when Todd Terry's remix of the Amplified Heart single "Missing" turned into a worldwide dancefloor filler and monster hit. In between there have been a few lows, most notably with the largely overlooked and not very good Worldwide album in 1992, but for the most part Everything But The Girl has enjoyed a certain amount of success as a band.

What I've always admired about Tracey Thorn and Ben Watt is their willingness to never make the same record twice. Especially in their early years, things shifted dramatically from record to record, and then, in the mid-90's, the success of the "Missing" remix coincided with Ben's fascination for electronic music, resulting in their two final albums, Walking Wounded and Temperamental.

Bedsit Disco Queen is a book to enjoy, well-written and interesting, and it sheds new light on one of my all-time favourite bands. It's also chock full of funny anecdotes. Read it if you will, and while doing so, listen to the music of Tracey Thorn and Ben Watt once again. Below you'll find the playlist I compiled for Norwegian streaming service WiMP last year, featuring a total of 61 songs, including the solo work of both and a few classic collaborations. Enjoy!

PS! The book was also enlightening in another respect. I've always considered the Idlewild single "These Early Days" to be a love song, whereas it is in fact about Tracey Thorn's (at the time) newborn nephew. Naturally it's still a love song of sorts, but not quite the kind I thought it was.
Lagt inn av Eriks musical diary kl. 12:47