David Bowie/Pat Metheny Group - This Is Not America

In the early- to mid-80's David Bowie was the go to-guy if you wanted a cool theme song for your movie. John Schlesinger's 1985 film The Falcon And The Snowman is probably far more famous for its theme song "This Is Not America" than for anything else, including killer performances by Sean Penn and Timothy Hutton. Pat Metheny and Lyle Mays were commisioned to write the soundtrack for the film, and someone got the brilliant idea of bringing in Bowie to sing "This Is Not America". It's remained one of his most appreciated songs of the entire decade, and while so many people love this song, almost nobody remembers the movie. Them's the breaks! 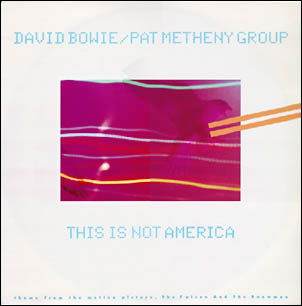