A fantastic cover version of an often overlooked David Bowie classic. "The Secret Life Of Arabia" is the final song on the 1977 "Heroes" album, written by Bowie along with Brian Eno and Carlos Alomar. It was once described as "like seeing The Sheik on acid and laughing quietly to yourself". But now, to the version at hand: B.E.F. (British Electric Foundation) is a band/production company formed by Martyn Ware and Ian Craig Marsh after they left Human League and before they formed Heaven 17 with singer Glenn Gregory. They released an instrumental debut cassette in 1980 and in 1982 they released the album Music For Quality And Distinction Volume One with lots of guest singers performing sundry cover songs. Most famous is Tina Turner's rendition of "Ball Of Confusion", and a close second would be this incredible take on "The Secret Life Of Arabia" featuring the vocal brilliance of Associates singer Billy Mackenzie. It's a bit different take than the atmospheric original, still funky, but in an almost Hi-NRG arrangement, that's lifted to the heavens by Mackenzie's otherworldly voice. 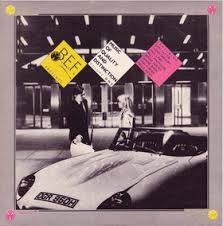