The Colourfield - Windmills Of Your Mind

"WIndmills Of Your Mind" is one of the prettiest songs ever written, and that's not up for discussion. Originally a French chanson written by Eddy Marnay and Michel Legrand called "Les moulins de mon cœur", it was adapted into English by Alan and Marilyn Bergman and used as the theme song for the 1968 film The Thomas Crown Affair where it was performed by Noel Harrison. It has been recorded by numerous artists including Sting who sang it for the 1999 remake of the film and more famously by Dusty Springfield on her classic album Dusty In Memphis. My favourite version however, is by The Colourfield, the trio Terry Hall established after Fun Boy Three had disbanded, who used it as a B-side in 1984. The sparse arrangement and Hall's haunting voice perfectly complement the deeply poetic lyrics. This is true beauty in three short minutes. 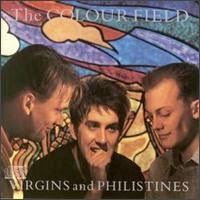