Last night I saw the amazing French movie The Intouchables (2012) and was reminded of the awesomeness of Nina Simone's "Feeling Good", a stellar performance from her 1965 album I Put A Spell On You. It's used to full effect during a paragliding scene in which the Alps unfold beneath protagonists Driss and Phillippe, and it has also been used in other films and TV series, as well as being sampled by Jay-Z and Kanye West, Flo Rida and others. The song was written by Anthony Newley and Leslie Bricusse for the musical The Roar Of The Greasepaint - The Smell Of The Crowd in 1964 but was made famous by Simone. It has also been covered by many, including George Michael, Michael Bublé and, more surprisingly Eels and Muse, but Nina Simone's version still shines brightest. 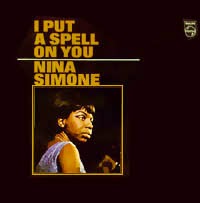