A show of hands from everyone who loves A Charlie Brown Christmas, please! Yup, that's a lot of people right there. "Linus And Lucy", written by Vince Guaraldi and first released on Vince Guaraldi Trio's 1964 album Jazz Impressions Of A Boy Named Charlie Brown, was turned into a Christmas classic the following year when it appeared in the television special A Charlie Brown Christmas, along with the rest of Guaraldi's lovely music for the show. It has appeared in several more Peanuts shows too, and is inextricably linked to the characters of Charles M. Schulz. A lesser known fact about the "Linus And Lucy" tune is that it was used as wake-up music for the crew of Space Shuttle Endeavor on day 2 of the STS-123 mission on March 11, 2008. And now, even more astounding, it's used for day 3 of Erik's musical Advent calendar on this day, December 3, 2014. 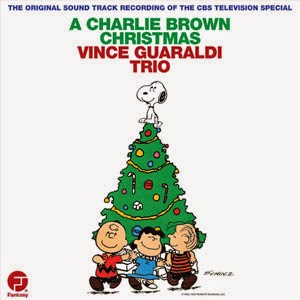