Let's make way for the Christmas ballad today in Erik's musical Advent calendar. The soppy-and-sad-in-a-good way "Lonely This Christmas" is simply astonishing and has become, to me at least, essential seasonal listening. Hitmakers Nicky Chinn and Mike Chapman owned the British charts in the early to mid-seventies, writing and producing singles for (mostly) glam rock acts like Sweet, Suzi Quatro, Smokie and Mud. The latter's fabulous Christmas single became the band's second number one hit, topping the UK charts in December 1974. It's an Elvis-imitating, self-indulgent, super-sentimental and very beautiful ballad. 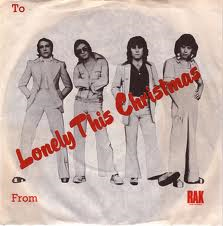