The coming Friday is the day I will finally experience Peter Gabriel live. For some mysterious reason I have managed to avoid going to any of his former shows here in Norway, so when he's here to perform the entire 1986 So album as well as other tracks from throughout his solo career, it's about time.

Two days ago my acquaintance Bård Larsen wrote an essay about Gabriel, and So in particular, in Norwegian newspaper Klassekampen, and in a rough draft of the article he claimed that "Red Rain" was Gabriel's best song. I dismissed it out of hand but when listening to "Red Rain" again I can see why he thinks so. Hell, even Gabriel considers it to be among his very best songs. As many will know this is the opening track from So, marking Gabriel's return to recording after a four year hiatus, following his fourth consecutive self-titled album from 1982. With So and the help of producer Daniel Lanois Gabriel opened up his sound to expose new vistas and in a way came up for air. Although the release of the album had been preceded by the surprisingly upbeat and radio-friendly "Sledgehammer", the hi-hat, subsequent instrumentation and crystal clear production of "Red Rain" were the elements that truly defined Gabriel's new direction, and the song is, of course, a true masterpiece.

So when my friend thinks "Red Rain" is Gabriel's best song, who I am to say otherwise? Similar arguments can be made for several more of Gabriel's songs, including my own favourite, the 1980 single "Games Without Frontiers", and other So tracks as well. So here's to Gabriel as one of the world's most interesting and exciting musicians and songwriters, and to Lanois as one of the world's cleverest producers. We are so (sorry, pun intended) looking forward to Friday's show. 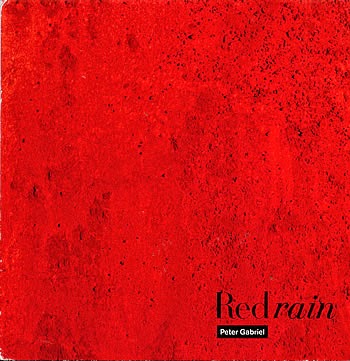